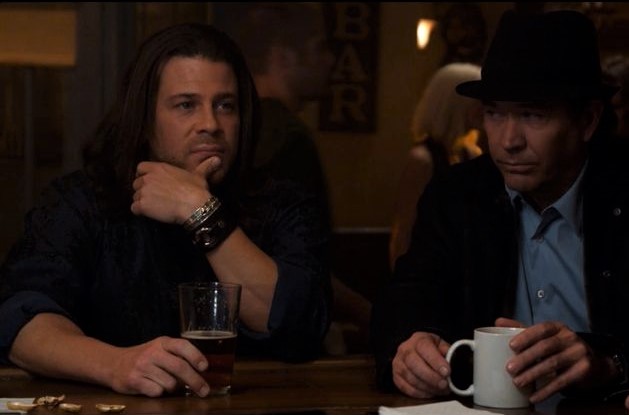 In his more sober moments after Kentucky, Nate notices a change in Eliot. Not a big change, but watching the four thieves has become a hobby for Nate. The better he knows the real people behind the paper files, the better he can predict their behavior.

For the most part it works, except on Eliot. Just when he thinks he has him pegged, the picture shifts. It’s irritating, but intriguing. He seems almost mellow—well, as mellow as Eliot gets.

Because he was intrigued, Nate started insinuating himself into Eliot’s time and space. That got the retrieval specialist’s back up.

“Thought we could change that.” He took a pull off his glass.

That earned him a grunt of acknowledgment, but the younger man tolerated his presence. That tolerance started moving toward the courtship dance around the time they went to Juan. When they finally got out of the bank, Eliot had been snarly and snappish until he had Nate under his hands, then he settled down to merely growling and glaring.

Their relationship moved from courtship to consummation while they were in Belgrade.

A week after they got home, Eliot wined, dined, and served him dessert that left him wrung out and panting in Eliot’s bed. The next morning he told Nate he was going out of town on a job. When Nate pressed for details, Eliot told him he couldn’t talk about it. That turned Nate’s blood to ice.

On an intellectual level, Nathan Ford knows what Eliot Spencer does. He’s read the man’s file—what there is of it. You don’t get a half million dollar bounty on your head by being a good guy.

On an intellectual level, he knows a little of the price Eliot’s paid in flesh and blood to get to the top of his profession. Though most of his scars have faded to silvery lines on the compact, muscular body, the life threatening scars stand as a testament to his stubborn will.

On an emotional level Nate wants to rant at Eliot about taking the job—then for taking the job without the team for backup, he knows that will only close the hitter up tight as a clam, and he’ll go anyway.

Eliot seems to understand the price for Nathan’s silence is that he holds on a little tighter and a little longer and the goodbye kiss is a little more desperate.

The first week, Nate keeps busy looking for their next client. He makes a valiant attempt to be more functioning than alcoholic.

The second week he says piss on that and becomes more alcoholic than functioning.

The third week he attempts to go back to functioning just in case this is the week Eliot comes home.

At the start of the fourth week, Nate opens the door of his apartment, and there, gray with exhaustion is Eliot.

Eliot staggers into Nate’s arms like it’s the last safe place in the world and buries his face in Nate’s neck and breathes deep. Pulling them into the apartment, Nathan pushes Eliot back and really looks at him.

“Eliot?” He puts all his concern and love—love?—love!—into his voice.

The expression in those blue/grey eyes is one of haunted devastation, like the job left even a man as strong as Eliot mentally raw and bleeding.

Eliot shakes his head and starts moving toward the bedroom. A trail of clothing leads to the shower. Eliot jerks, startled when Nate climbs in behind him, but doesn’t protest when he washes him down and bundles him into bed.

Nathan curls around the younger man, and Eliot surrounded by the warmth and smell of what he has come to associate with safety and home finally sleeps.

Understand that the right to choose your own path is a sacred privilege. Use it. Dwell in possibility. Oprah

A place with natural, environmental and healthy resources

Where imagination runs free and fun is had by all