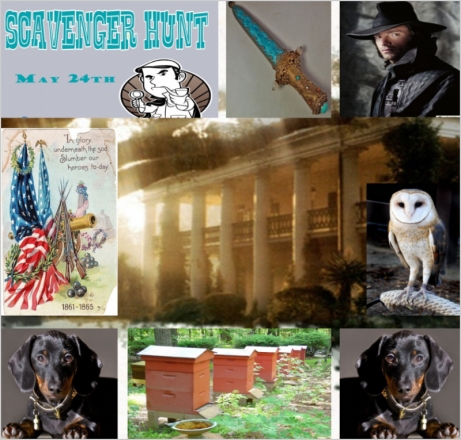 Taking a circuitous route between the kitchen and his office, Nico noticed Thomas’ house elves had been busy preparing for the upcoming Memorial Day weekend. He sometimes missed the days when Clan members gathered several Sundays during spring to tend the graves in the family and military cemeteries around the area. Those days had been good for the Clan. Honoring the fallen while reconnecting with members and Chosen Ones. As the country moved into the industrial age and members of the Clan scattered across the country, it became harder to get the Clan gathered in one place at the same time.

This year everything had changed. The betrayal of one of their own was bringing an onslaught of Clan members wanting to renew ties with their Clan leadership and assure their leaders of their loyalty. The Manor’s guest quarters were nearly full. Every bed and breakfast, inn, motel and hotel between the Manor and New Orleans was seeing a surge in business. It was good to see old friends and have a chance to get acquainted with the newer members of the Clan. Pausing at the French doors leading out of one of the Manor’s parlors, Nico stopped to watch Horatio’s son escorting Chase’s daughter across the yard explaining things around Manor to her as only a child could. Chase and Jack sat watching from the patio, fighting to keep from laughing at the boy’s narrative.

“Surveying your kingdom, General?” Tony Stark breezed by him on the way to Nico’s office.

Tony called the week before asking to spend a few days at the Manor to meet with Dean in preparation for his summer internship at Stark Industries. Having Ironman touch down on the helipad yesterday had caused quite a stir among the Manor inhabitants for all of five minutes. Conscious of Tony’s claustrophobia left over from his kidnapping, Thomas had placed the billionaire next to Dean and Sam’s rooms instead of in the Underground.

The Winchesters had completed finals two weeks before and been handling cases for Gerard that were near their route they were taking to the Manor. They had arrived a few days before Stark, and after a day for Tony to settle in, Dean and Tony had commandeered one of the Manor’s many parlors, only surfacing at odd times until now.

“Joining us for the Clan sojourn to do cemetery clean-up around Vacherie?”

“I wouldn’t want to be a distraction. I know Decoration Day is a thing around here.”

“No one pays much attention to another pair of hands when it comes to taking care of those who gave all for the life we have.”

Friday morning Nico noticed certain members of his Clan spending a lot of time tapping their phones or pouring over a sheet of paper. The fact that some of them were Clan trouble magnets was a little disconcerting, but he was deep in organizing his clean-up campaign, so pushed his twinge trepidation to the back of his mind.

By Friday evening, many of the Clan had arrived at the Manor. Cook and Thomas had outdone themselves with the buffet spread of food available. People were milling around the grounds, eating, play games, and visiting with other Clan members. Nico noticed several Clan members appearing with scratches, bites, and stings. He also noticed Dean and Tony disappearing with those same people, causing his intuition to twitch until sensitive ears picked up the sounds of Tim yelling for Thomas. Five minutes later it was his Second-in-Command yelling. By now all the Vampires in the yard were looking toward the house curious about the yelling. Seeing Darrell Dixon flying up the drive on his motorcycle with Bobby tucked in his vest decided Nico that he needed to find out what was happening.

Listening to Darrell’s tale of disturbed bees and Bobby taking a chunk out of some skinny Vampire’s ankle, had Nico yelling for Thomas. The harried Chief of Staff took longer than normal to appear in his office.

“What the hell is going on around here?” He demanded.

“I have no idea, Master Nicolaus, but certain items have come up missing around the Manor.”

Before Thomas could answer it was Warrick yelling his name. Determined to get to the bottom of whatever was happening, he told Darrell to get something to eat and to have Cook pack something for Rick before following Thomas up the stairs. Entering his suite, he was greeted by his pissed off Mate and children.

“What’s with all the racket. They probably heard your bellowing in New Orleans.” Nico demanded.

“The sporran gifted to me by My Lord.” Tim’s eyes flashed amber.

“My jeweled dagger.” Warrick tugged one is his dreadlocks in frustration.

Frazzled by so many things missing from private suites, Thomas exchanged a look with Nico. “We need to check camera feeds. Perhaps Master Harold is testing the new security system.”

“Would be a perfect time …” Tony added.

“I hate to be the bearer of bad news, but I am not running some sort of test.” A quiet voice came from behind them.

Seeing Harold and John, Nico sighed and rubbed the back of his neck. “Checking the cameras it is then. Oh. Darrell came by. It seems some of our members have been stirring up his bees. Bobby took a bite out of someone.”

“Thomas, is anything else missing?”

“I have no idea. I did not realize anything was missing until Master Timothy yelled.” Thomas was supremely affronted by the whole situation.

Thomas herded them all down to Nico’s office where Harold began to search the files for their culprit. Cameras around the orchards were sporadic but he did find footage of Danny Messer doing first aid on Greg Sanders’ ankle. A few minutes later, the cameras caught James Longworth trying to coax two very irritated miniature Dachshunds to him. All he got for his efforts were growls and nips. Finally, they found Abby coming out of Tim’s quarters … empty-handed but looking angry.

Just then they heard Gabriel making his way towards the office cursing a blue streak. “Where’s my damn hat?”

“What is going on?” Nico was becoming as frustrated as everyone else.

Sam Winchester slipped into the parlor Dean and Tony had staked out as their territory. His Mate’s big brain was a huge turn-on but teaming up with Tony Stark to plan a scavenger hunt was almost scary. Thomas and the rest of the staff had gotten used to not disturbing the two men as they talked science. That precedent made it a perfect place from which to run their Memorial Day Scavenger Hunt. Opening the buttons on his chambray shirt, he pulled out the young barn owl he’d taken from Nico’s aviary. Dean took the owl and set him on his shoulder. Merry and Pippin rolled on their backs and went back to the nap that had been disturbed when Sam slipped in the room.

“Getting bit by a tiny dog with a big dog attitude among other things.” Stark chuckled as he watched footage from tiny body cameras everyone in the scavenger hunt was wearing. “The best entertainment I’ve had in ages.”

“I thought one of the gators was going to get Hannibal when those pissed off bees were chasing him.” Dean added. He gave his Mate a sly look. “You haven’t won yet, Sammy.”

An hour later, the bellow from a man used to shouting orders on the battlefield filled the Manor. “THOMAS!”

A camera clicked as Thomas Efford, the most composed man in the Clan, in a move not seen in several decades, jogged across the main hall and up the staircase. A few minutes later, phones went off across the Manor, including that of a certain red-head whose smirk said he was up to no good.

Once the shouting and the running had calmed down, Tony gathered up the inanimate objects while Dean carried the animals. Making sure to dodge cameras and watch for pissed off Vampires, the two men dropped the honey from Darrell’s bees in the kitchen, then made sure the Council members were out of the house mingling with the Clan members staying at the Manor before going to return the rest of their pilfered treasures.

Sam was on the veranda telling Horatio about his offer to clerk for a Supreme Court judge when Dean and Tony finally appeared.

“Finally decided to crawl out of the geek zone. Everyone was afraid to go in the parlor.” Tim teased.

The evening was beginning to wind down when Sam felt a spike of surprise through his bond with Dean. His Mate had quietly slipped into the shadows, being followed by two miniature Dachshunds and a barn owl that somehow escaped. Everyone who had participated in the scavenger hunt was trying to disappear into the crowd or the shadows before they drew anyone’s attention. Deciding to follow Dean’s example, Sam tried to be casual in his attempt to move away from Nico and his siblings. He was almost in the clear when Nico called his name.

Sam froze. He saw Stark walking with Artemis toward the Clan Scientist’s lab. When Nico noticed where Sam was looking, the pieces of the puzzle came together.

“EVERYBODY FREEZE!” He could see several people trying very hard not to be noticed. “Dr. Stark, you wouldn’t happen to know anything about missing items and pissed off bees.”

“Nope. I was in the parlor with Dean all afternoon.” The genius grinned.

Before anyone could answer, Dean stepped out on the veranda with a trophy and a piece of pie.

“To celebrate National Scavenger Hunt Day, it is my honor to announce the winner of Sylum’s Memorial Day scavenger hunt. Congratulations, Sammy.” He handed Sam the trophy and walked over to Tony and Artemis enjoying his pie.

Sam did the only smart thing … He ran.

Nothing is True. Everything is Connected.