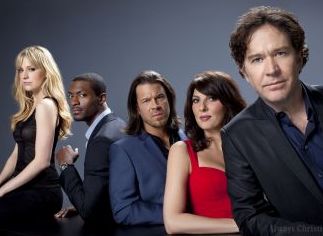 He was paralyzed. Parker yelling, ‘HARDISON!’ stopped him cold as he heard bodies colliding through his ear bud. He stood facing the bank of elevators, Alec’s voice yelling for Parker.

Nate and Sophie’s voices continued their roles while the sounds of something gone wrong overlapped them. Eliot moved enough to put his phone to his ear.

“Hardison! What’s going on!” He growled through gritted teeth.

“She what! Don’t make me come up there. Report!” Eliot barked.

Heads turned at the long haired man in the expensive suit yelling into his phone at some poor sap who was obviously scared to death of the snarling man.

Paralysis struck again at the sounds coming from Nate and Sophie. Their mark was getting restless. If they didn’t stay on the count, the whole con would go sideways.

People backed away when Eliot growled. “Hardison, did you get the paperwork?!”

“Are you in place?” He snapped as he listened to Sophie digging deep to keep the mark steady.

“I’ll worry about Parker. Shut your mouth and do the job.” Eliot demanded.

The elevator door opened and his paralysis ended long enough to propel him into the car. Nobody moved to join him as he did ‘that thing with his eyes that scared people’. The car stopped and Eliot heard two thumps on the roof. The hatch opened and Hardison lowered an unconscious Parker through the opening before lowering himself.

Eliot riffled through Parker’s pack, checking folders then throwing them in his briefcase. He gave Parker a quick once over while Hardison fidgeted. He stopped when Eliot glared, settling to chew his cuticles. Finding minor bumps and bruises and a knot on her head, Eliot pulled a cigarette case out of his suit pocket.

“Man! Since when do you smoke, and in an elevator to boot!” Hardison’s voice was almost a screech.

His jaw snapped shut when that earned him a growl and a glare as the hitter held something close to Parker’s face. The thief jerked back to consciousness when Eliot cracked an ammonia ampoule under her nose. The hatch shut behind the trouble twins when a gasp from Sophie and blustering from Nate again paralyzed Eliot. It seemed to take forever for the elevator to stop and the doors to open.

Temporary paralysis struck the room when Eliot came through the door like a whirlwind. The mark was holding Sophie by the arm pulled tight to his chest. He took one look at Eliot’s expression and raised his hands away from the brunette.

Eliot pulled the grifter to his side. He ran sensitive fingers over the reddened wrist. “Ya okay, Darlin’?” He nuzzled her hair while glaring at the mark.

“Ya better have a damn fine explanation for puttin’ hands on what’s mine, Hoss.” Eliot drawled menacingly.

Even Nate backed up at the black look on Eliot’s face.

“I just … She was …” He puffed himself up like a Bantam rooster. “You bring the files?”

Eliot released Sophie and started forward. The mark moved away until his back met the window.

“Have your woman bring it.”

Eliot gave a snort of disdain as he handed Sophie the case.

They exited the building and climbed into the limo at the curb. Hardison drove while Parker held a bag of ice on her head.

Surprise paralyzed his hands when the flighty thief carefully laid her head in his lap so he could check the lump on her skull. He carefully pulled the hair ties out of the blonde mane and parted the strands gently assessing the damage. By the time he determined she would be okay except for a headache, Parker was asleep.

Supper was over and the team scattered to their respective abodes. Eliot finished putting the kitchen to rights when temporary paralysis struck again. Someone prowled through the darkened room. He growled low. He’d had enough of this paralysis shit for one day.

Strong arms wrapped around his waist and pulled him into a broad chest. With a wicked grin he moved and it was someone else temporarily paralyzed.

The Sovereign's Handbook by Johnny Liberty